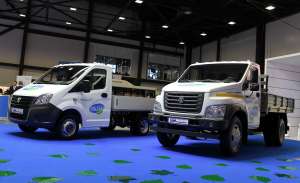 GAZ Group presented its CNG Next vehicles with Euro-5 engines. GAZelle Next and GAZon Next are equipped with the new Evotech 2.7 and YaMZ-534 CNG powertrains developed at Ulyanovsk and Yaroslavl engine plants of GAZ Group. The components of the CNG systems are certified in compliance with the EEC Regulations and are approved for usage in EU countries. The new vehicles were exhibited at the Ros-Gas-Expo show held on 7 – 10 October in Saint Petersburg.

GAZ Group presented the prototypes of the Next family vehicles with the engines fueled by the compressed natural gas. Today, the compressed natural gas is the most cost effective fuel used in commercial vehicles that reduces the fuel cost by 60% and 50% versus petrol and diesel, correspondingly. The vehicles using the natural gas combine comfort, safety and functionality of the Next family with high fuel economy and emission standards.

The light commercial vehicle GAZelle Next CNG has the new Evotech 2.7 Euro-5 engine made at Ulyanovsk engine plant of GAZ Group. The vehicle has four gas bottles with the capacity of 52 L each and maximum working pressure of 200 atm. The total range of the vehicle is 700 km. It has a common engine control system both for gas and petrol that provides easy switching between the two types of fuel as well as maintains the optimal ratio of air and gas in the fuel mixture. This engine control unit increases the total reliability of the fuel feeding system and improves the emission level and fuel economy of the vehicle. A button on the instrument panel controls the switching between the two types of fuel. The level of the fuel is indicated on the standard fuel gauge in the dash board.

GAZon Next CNG truck has a new CNG engine YaMZ-534 made at Yaroslavl engine plant of GAZ Group and developed in cooperation with Westport, Canada, the world leader in development and production of gas fuel systems for vehicles. This CNG engine is characterized by high power, fuel economy and durability. The vehicle meets the requirements of Euro-5 emission standard. The vehicle has seven gas bottles with the capacity of 52 L each and maximum working pressure of 200 atm. The range is 370 km.

The start of serial production of GAZelle Next CNG and GAZon Next CNG is planned for the second half year of 2015.